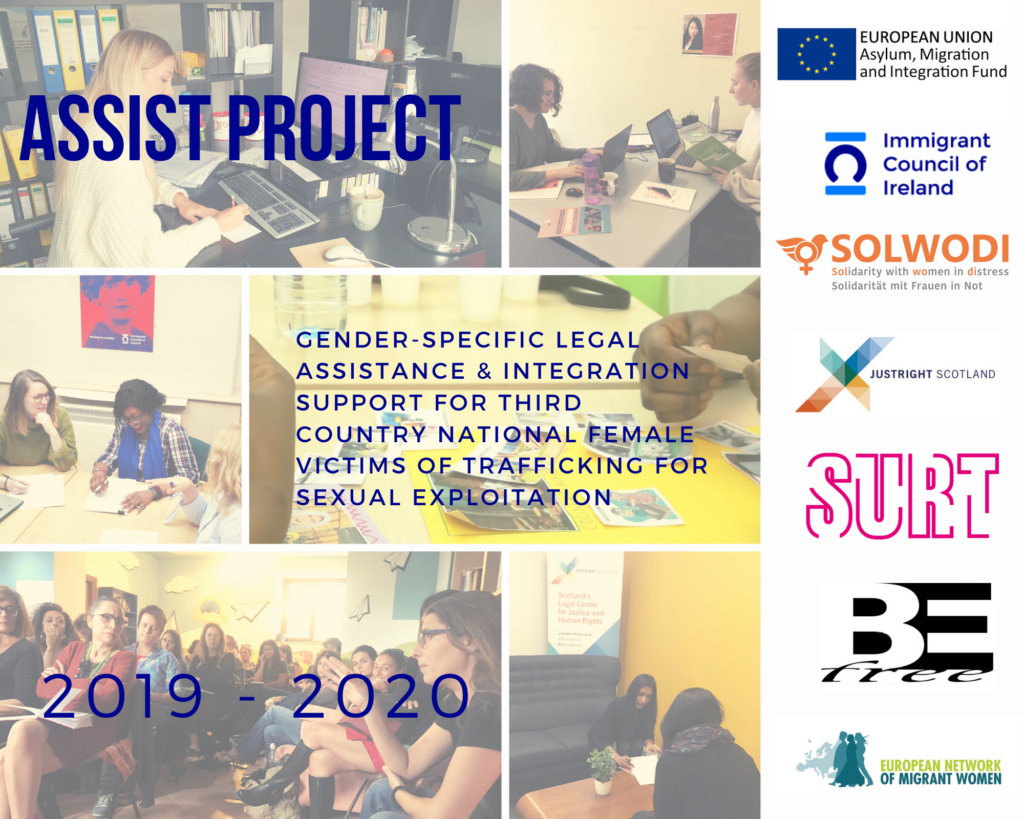 Today, JustRight Scotland led a delegation of female survivors of human trafficking to meet with the Cabinet Secretary for Justice, Humza Yousaf MSP at the Scottish Parliament.

The women – all of whom have survived sexual exploitation in the UK, and then chosen to make their homes here in Scotland – spoke to the Cabinet Secretary about the need for greater awareness of human trafficking in Scotland and how that can be achieved within the government’s current strategy. They also offered their views on a new duty on statutory authorities to notify the police where there are concerns around trafficking, and what – from a survivor perspective – must be taken into account in framing this duty.

One survivor has told the Cabinet Secretary:-

If there was greater awareness, someone like me would not have suffered. I was only in the situation for a few months but the impact is long lasting on my life. Human trafficking is real and it is happening right here in Scotland.

The Scottish government has led the way in ensuring survivors play a meaningful role in informing the response to trafficking in Scotland.

The accounts I have heard from human trafficking survivors demonstrate the serious, lasting impact this complex crime can have on victims. We want to engage and empower survivors as they play a meaningful role in informing the response to trafficking in Scotland.

Victims may not feel able to reach out to authorities and lack awareness of their rights and how to get help or advice, which plays into the hands of traffickers. By listening to the views of survivors we can ensure that the duty to notify process protects victims’ human rights and that the information gained is helpful in breaking the cycle of trafficking and exploitation.”

Survivor engagement and leadership is increasingly being viewed at an international level as a key component of any holistic and effective anti-trafficking response. We are delighted that the Scottish government has led the way in ensuring that survivors of human trafficking in Scotland are supported to play a meaningful role in this response – with the meeting today just being one example of this.”

JustRight Scotland receives funding to support female survivors of human trafficking through the ASSIST Project. The ASSIST Project is a two year funded EU-funded project focusing on long term integration of trafficked women recovering from sexual exploitation as well as empowering survivors to play a leadership and mentoring role in our response to human trafficking at an operational, strategic and policy level in Scotland. Through the ASSIST Project, for example, this survivor group have also contributed to a recent Scottish Government written consultation response on the new ‘duty to notify’ the police about trafficking concerns, and will continue to use their experience and voices to shape future Scottish Government responses to trafficking in Scotland.

The ASSIST Project and the Scottish Government also jointly fund free weekly confidential legal surgeries for female survivors of trafficking at the offices of the Trafficking Awareness Raising Alliance. These surgeries offer women, at all stages of their recovery, an opportunity to meet with a female specialist lawyer for advice on a broad range of issues.

About the EU ASSIST Project

One of the aims of the EU ASSIST project is to provide a number of trafficked women with legal advice, information and support in accessing material assistance (social and financial). It is acknowledged in such cases, individuals often experience a significant trauma and lack the life skills, training or experience required to quickly integrate into the job market and thus provide for them or any dependents.

We are thrilled to partner on this two year project with the Immigrant Council of Ireland, SOLWODI Germany, BeFree Italy, SURT Spain and the European Network of Migrant Women (ENOMW).