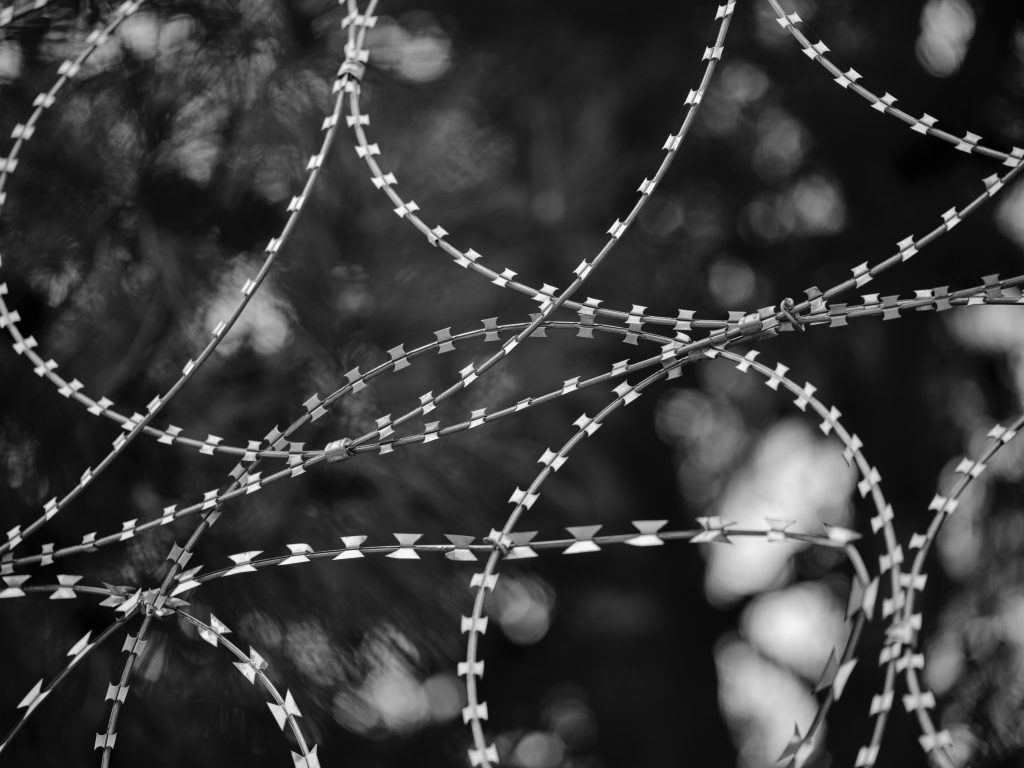 The Memorandum of Understanding between the UK Government and the Republic of Rwanda, announced on 14th April, is an agreement to trade in people.

This plan will not strength any commitments on the protection of refugees and migrants as it states. In fact, it does the opposite. Rather than accessing the right to seek asylum in the UK, asylum seekers will be sent to Rwanda. However, the plan goes beyond what those of us in the sector feared. We believed that such a plan would involve processing in another country and then, if refugee protection is granted, the person would return to the UK. That is not the case. They will be expected to live in Rwanda. This cannot therefore be considered as “offshore processing”, which implies a return.
This is simply a deal where the UK pays Rwanda money to accept people who are being moved against their will.

Now think about this for a moment or two. Think about our nation and continent’s history with colonialism and the slave trade. Ask yourself if you are comfortable with this plan. Are your friends or family? Are your religious or spiritual communities?

Who does this plan target?

Some people may think that this approach can be justified because these individuals are “illegal immigrants” and therefore are “foreign criminals”. This basic premise has been used to great effect to garner voter support for the Hostile Environment for the last decade. But let me be clear. They are not “foreign criminals” or “illegal immigrants”.
Almost all who arrive in small boats claim asylum – it’s their right under international law. They have not committed any crime or done any harm.

The Home Office says those who cross the Channel are also “economic migrants”. Again, that is wrong. Look at the countries where most of those in small boats come from: Iran, Iraq, Eritrea, Syria, Afghanistan and Sudan. Sadly, they share in common civil war, autocratic regimes, and poor human rights records.

But you do not need to just believe what we say. Despite the UK Government rhetoric on these people, the statistics released by the Home Office confirms that they actually grant the vast majority of people from those countries Refugee Status, meaning the UK Government accepts they are Refugees. 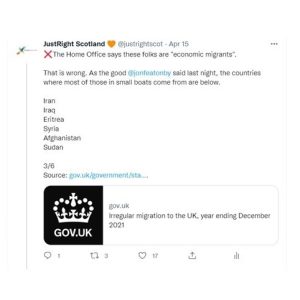 What about those who are refused asylum? Are they “economic migrants” then? No. The Home Office lose 48% of their appeals. This means that almost half of their refusals are found to be unlawful by the courts.

But do we not have safe and legal routes?

You may hear the UK Government claim that those who arrive in small boats are “skipping the queue” ahead of women and children, and that the UK is very generous with its provision of safe and legal routes to the UK. This is also misleading. Below shows the number of people from those countries resettled by the UK in 2021. 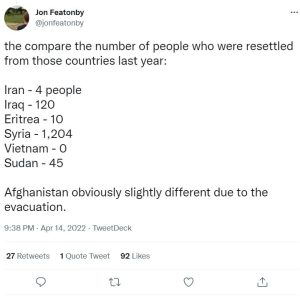 In fact, the UK is closing down the safe and legal routes it claims to support. The Vulnerable Persons Resettlement Scheme (VPRS), which was established for the Syrian war, has closed.  The Dublin III Regulation, which allowed families across the EU to reunite to have their asylum claims heard together, has stopped due to Brexit. The ‘Dubs Amendment’, which pledged to resettled 3,000 children directly from refugee camps, has closed.  It took 480 children.
Even refugee family reunion under the Immigration Rules, which is the predominant safe and legal route for women and children needing protection to come to the UK, is being severely limited by the UK Government in its Nationality and Borders Bill.
We cannot decry those entering the UK by small boats when we are simultaneously shutting down any other way to enter the UK.  Our law insists that you are in the UK to claim asylum, but we have eliminated the ways to enter the UK to do so.  You cannot claim asylum in the UK from overseas; we do not allow it. You cannot enter the UK on an “asylum visa” and then claim asylum; we do not allow it.  If you enter the UK on another visa and then claim asylum, you are accused of lying to the UK Government; you are punished for that. We have closed down or limited most of the resettlement schemes to enter the UK. The difficulties with the various Ukrainian Schemes have shown how hard it is to enter the UK “legally”, with thousands of families stranded in conflict by Home Office delays.
Often the last option to seek asylum in the UK is therefore by entering using a small boat or lorry. Well, guess what?  The Nationality and Borders Bill is criminalising doing so. The United Nations has even condemned the Bill.

What about claiming in France?

The UK Government advises that those individuals who will be subject to the Rwandan plan can simply stay in France. This fails to acknowledge that France received in 2021 more than double the number of the UK’s asylum applications. This has been the pattern for much of the last 8 years. As a result there are challenges with infrastructure, support, and accommodation. Many people we support have been street homeless in France. Many others have families, friends or other connections with the UK. There is no international law which states you must claim asylum in the first country you enter (although, as the UN points out, more than 85% of the world’s refugee do anyway).

So these are the facts. When thinking about this UK-Rwandan plan, ask how it fits with the war in Ukraine, very close to our shores. Or the fall of Afghanistan to the Taliban, after a conflict in which we fought. Or the humanitarian disasters in Yemen or Ethiopia. We could go on.
If you want to know how to help, please take action through our good friends at Together With Refugees.
Much has been made of the financial cost of the Rwandan plan. But the cost beyond that, which we will pay as a country, is immeasurable.