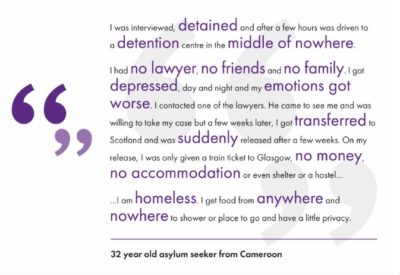 In May 2017, the Scottish Parliament’s Equalities and Human Rights Committee (EHRiC) published a report on the findings of its recent inquiry on destitution and homelessness of asylum seekers and people with insecure immigration status: “Hidden Lives – New Beginnings”.

The report starts with a stark reminder that an unprecedented 65.3 million people around the world have been forced to leave their homes. Of these, nearly 21.3 million are refugees, over half of whom are children under the age of 18. In this context, many countries have seen increased migration in the last few years, including Scotland.

No Place for Destitution in a Modern, Welcoming Scotland

Kirsty from JustRight Scotland gave evidence at the inquiry on behalf of the Immigration Law Practitioners Association (ILPA). Her evidence highlighted that many individuals who are homeless and destitute in Scotland may actually have the lawful rights to accommodation and support but face multiple barriers in accessing those rights. The committee agreed, concluding: “The sheer complexity and inaccessibility of the process makes it unnecessarily difficult in practical terms for someone who is new to the UK, who is destitute, to initiate the process…Destitution is … built into the system.”

The inquiry also heard directly from individuals who have suffered homelessness and destitution in Scotland for these reasons. Christina McKelvie MSP writes: ”For many people going back to their home country is not a choice, being destitute is preferable to being imprisoned, tortured or killed…Destitution is harmful. It further traumatises people, makes them more vulnerable to exploitation and increases health issues – this is not acceptable in a modern, welcoming Scotland.”

Increasing Numbers of Destitute Refugees and Asylum Seekers in Scotland

Yet the report cited evidence from the British Red Cross in Scotland and the University of Glasgow which demonstrated a significant increase in destitution amongst refugees and asylum seekers in the last two years.  This increase was attributed to:

A key finding of the report is a call for the creation of a robust advocacy service to provide support to individuals navigating complex legal systems, and a recognition of the role that access to early legal advice can play in preventing destitution before it occurs.  The report also highlights the need for effective multi-agency solutions to support this early preventative approach.

To meet this challenge, JustRight Scotland, in collaboration with the British Red Cross, will be launching a new Asylum Support Legal Project in September 2017, a social justice collaboration which will expand the capacity of frontline BRC caseworkers to offer advice and support to homeless and destitute individuals, with training and supervision from JustRight Scotland’s lawyers.

Meeting the Challenge: The WASH Project Advocacy for NRPF Families

The workshop opened with a brief welcome from Professor Stephen Webb of Glasgow Caledonian University, Social Work Department, and Sheila Arthur who spoke on behalf of the Asylum Seeker Housing Project (ASH/WASH).

Natalia Farmer, PhD Researcher at Glasgow Caledonian University, spoke about the challenges facing NRPF families and gave examples of some of the specific issues encountered by families WASH has supported over the past year.  Her examples highlighted the difference that a dedicated and persistent advocate can make in improving access to rights. 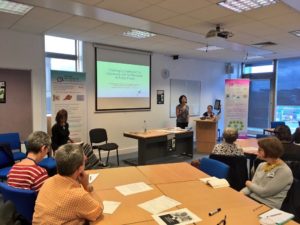 Jen and Sarah from the JustRight Scotland team co-delivered the workshop, and spoke about “Challenging Destitution for Individuals with No Recourse to Public Funds.”  They explored the legal rights underpinning the responsibility of local authorities to support destitute children and families, regardless of migration status, and highlighted some practical steps that advocates can take in support people to access their rights.

The workshop was well attended by a range of social work academics and practitioners, as well as advocacy and support workers from third sector organisations, legal representatives and service users of WASH with direct experience of the challenges of accessing support and accommodation.

The discussion which concluded the workshop was spirited, lively, and inspiring, ending with an agreement to work towards the establishment (or revival) of a NRPF network in Scotland.  This will give stakeholders a forum to discuss emerging issues and contribute to policy, and also support the organisation of free training and sharing of resources around this important and timely issue. 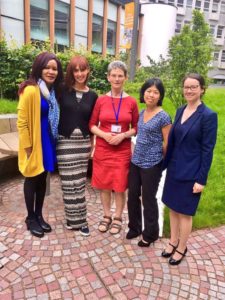 (from left) Olivia from WASH, Natalia from Glasgow Caledonian University, Sheila Arthur from ASH/WASH, and Jen & Sarah from JustRight Scotland