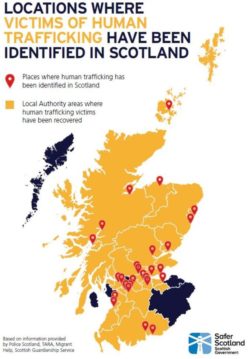 On 27th August 2017 the Scottish Government launched a public information campaign to help raise awareness of human trafficking in Scotland. At JustRight Scotland, our team of lawyers have been working with survivors of trafficking and exploitation for over 10 years and we support this campaign.

Human trafficking is the illegal trade of humans, often for the purposes of forced labour, slavery, or commercial sexual exploitation. Individuals can be trafficked within their own country, but there is often an international element where people are taken abroad to be exploited. Human trafficking is a crime and an abuse of human rights and can have long lasting effects on the survivor. The International Labour Organization estimates that 21 million people are survivors of forced labour, alone, globally. Almost a third of worldwide survivors of trafficking are children.

Trafficking in persons may seem like a thing that happens elsewhere, however, almost every country in the world is affected by human trafficking. Scotland is no exception, as our team can testify to 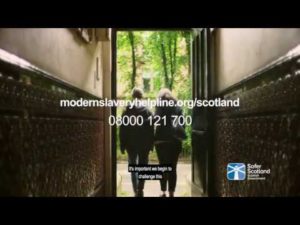 As part of their campaign the Scottish Government have produced a short video, alongside our partners the Trafficking Awareness Raising Alliance (TARA) to raise awareness of trafficking in Scotland, highlighting some of the things all of us can look out for.

If you have concerns that human trafficking is happening in your area, contact the helpline on 08000 121 700.