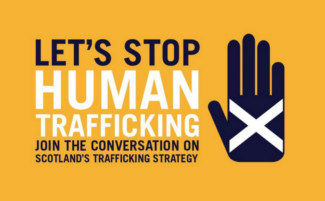 We were delighted to be asked to present at the first National Human Trafficking Conference, organised by Police Scotland at Tulliallan Castle on 13 September 2017.

Kevin Hyland, the UK Independent Anti-Slavery Commissioner, opened the conference and commended the partnership approach Scotland adopts in this area. He also highlighted the report that his office released last week in relation to human trafficking from Vietnam.

The Scottish Government presented on their strategy in relation to human trafficking as well as their awareness strategy which we highlighted in our recent blog.

Collaborations, Investigations and a Human Rights based approach

Inputs were made by the National Crime Agency, NSPCC, Europol, Migrant Help, the Crown Office and JustRight Scotland looking at how to obtain the most effective law enforcement response whilst ensuring that the rights, safety and welfare of the potential survivor of human trafficking are paramount.

All of this was put in context by a powerful and courageous input from a survivor of trafficking which brought the event into stark focus. Partnership working and collaboration were a key theme of the day with it being clearly stated that “we work better when we work together”. Something we at JustRight Scotland could not agree with more. 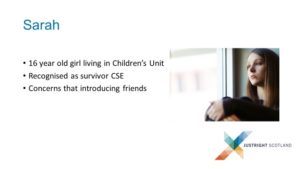 Part of our contribution highlighted the complexity of human trafficking and the importance of being alert for indicators of human trafficking. We looked at the case of children in Scotland who may be survivors of commercial sexual exploitation (CSE) and queried how many would identify those children as having been trafficked. This is despite British children being the third highest number of survivors identified in England last year.

This is not the first time that we have posed this question together with our partners. Indeed, a report has just been published by Glasgow City Council Child Protection Committee and the University of Stirling on CSE.  This report looked at pathways into exploitation, agency responses and outcomes for young people.  It found evidence of growing awareness and confidence in responding to CSE, but recognised the need for more robust assessment frameworks and risk indicators.

JustRight Scotland will continue to work in this area with its partners going forward.