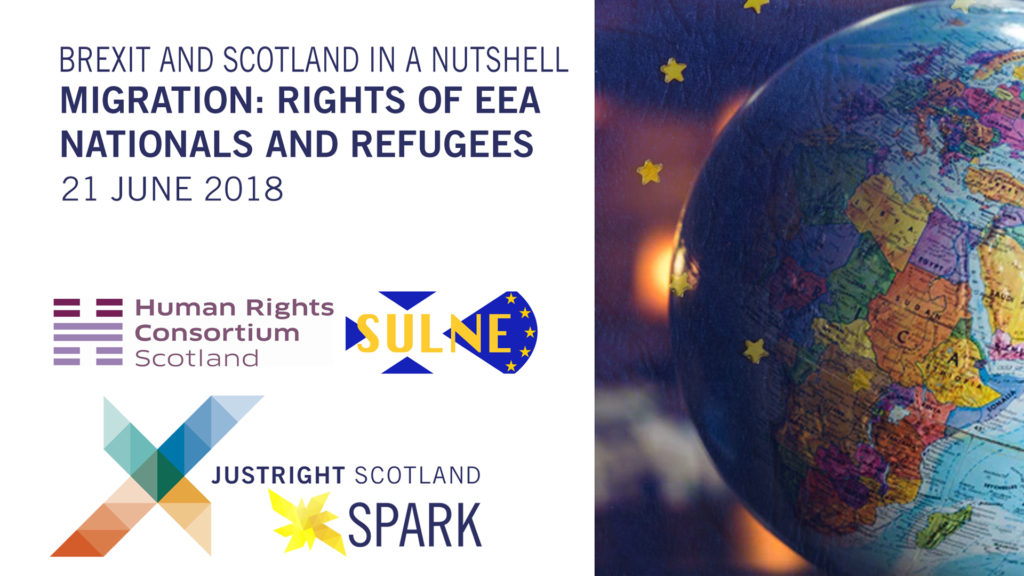 As 29 March 2019 (the date that the UK officially leaves the European Union) looms closer and closer, many EEA nationals residing in Scotland are still unsure on how their migration status and rights will be affected post-Brexit. This lack of clarity around how Brexit will affect human rights in Scots law is exactly what our JRS Spark: Brexit and Scotland in a Nutshell event series (funded by the Clark Foundation for Legal Education) aims to tackle. By giving the public a chance to discuss the consequences of Brexit directly with our invited legal experts, we hope to foster a more open conversation on how Brexit will transform the legal reality of everyone in Scotland. 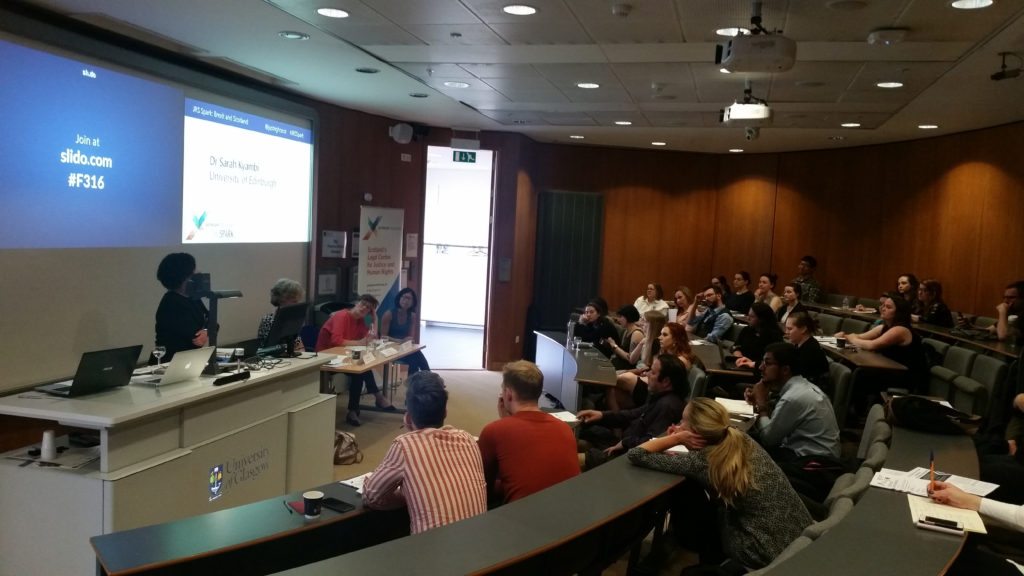 In order to facilitate discussion among all attendees, we made use of Slido: an app that allows for live participation by way of smartphone. Attendees could vote in polls and send in their questions throughout the event, with results directly visible on the screen. Of course, old-fashioned hand-raising was also welcome! We found that a combination of written and spoken discussion points made for a dynamic conversation, thanks to our high number of enthusiastic attendees.

Dr Maria Fletcher opened up the panel by outlining everything we know about the legal conditions for EEA nationals to stay in the UK after Brexit comes into effect. She went through the core EU rights (relating to freedom of movement) that are at stake and what has been agreed between the EU and the UK so far, as well as remarking on the considerable amount of future uncertainties. Dr Fletcher discussed that while the UK government has started to lay out plans on how EEA nationals will be able to apply for settled status and pre-settled status until 2020, this process will likely not be as simple as has been suggested for everyone, with the particularities of many groups of people still falling between the cracks of the proposed legal framework. 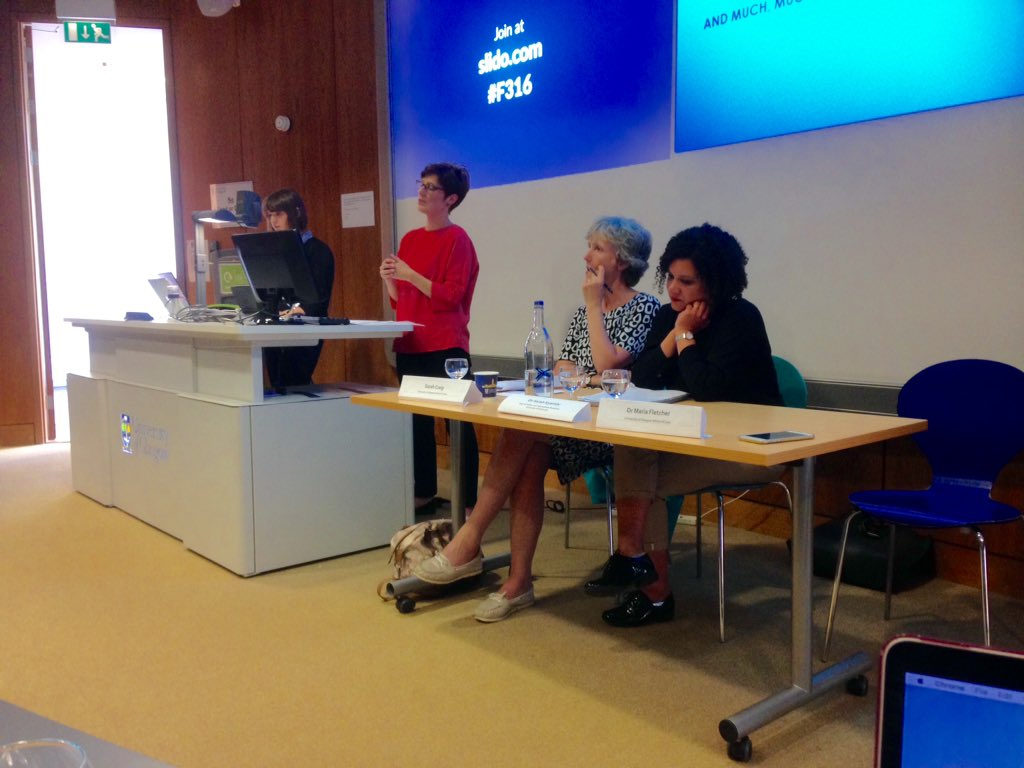 Dr Sarah Kyambi went on to discuss the need for a more flexible UK immigration policy, particularly in light of the implications of Brexit for labour immigration policy. A slido poll showed that 80% of attendees in the room supported a differentiated immigration policy for Scotland – a level of support not often found elsewhere! The discussion highlighted that “labour immigration needs” cannot be generalized for the entirety of the UK, complicating how post-Brexit immigration law may play out on the labour market in the future. 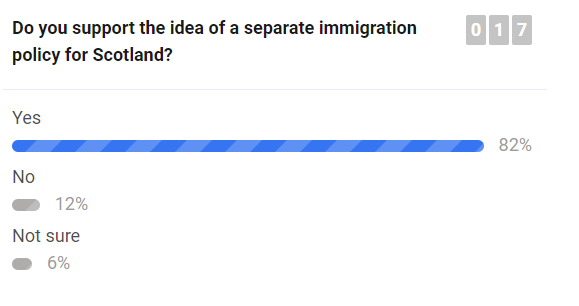 Sarah Craig’s keynote speech emphasised the uncertain position of refugees and asylum seekers in a post-Brexit legal climate. She outlined how Brexit will affect the rights of individuals seeking international protection (asylum) in Scotland, and subsequently the quality of protections for human rights under Scots law. Notably, legal requirements resulting from the Dublin Regulation and the Common European Asylum System will no longer be applicable.

This discussion finished off with the question of whether or not Scotland is a welcoming country for refugees. Many of our attendees said ‘yes’, but debated on how effectively our devolved powers were being used to support and integrate refugees, particularly in regards to the education system.

“We in Scotland need immigration, if having our own policy is the only possible route to that, then we need our own [immigration policy].”

“Failure of points-based system shows that focus of policy development and legislative design fails to take into account regional differentiation. Would regional MACs help with this and in turn help to design a set of differentiated regional policies?”

The seminar was rounded out with a final  Slido comment: “The idea of Scotland as a welcoming country is aspirational, and that can be good – but I wonder how it feels to have negative experiences as a refugee in Scotland and to repeatedly hear that Scotland is a welcoming country”. We felt this comment illustrated the contradictions that seem to define the post-Brexit discussion on migration rights. An EEA national or refugee may hear one message from the government or the media while seeing another being implemented in law and actually affecting their life on a day-to-day basis. The murkiness of the message in post-Brexit migration rights is a challenge in itself to the protection of human rights in Scotland, inside or outside the EU.

We would like to thank each and every one of our speakers and our attendees for coming along and contributing to a lively and valuable discussion – and we hope to see you at the next JRS Spark event!

EU Citizens’ Rights Project – Factsheet on the rights of EU citizens’ rights in the UK, before and after Brexit – available in English, Romanian, Polish, and Spanish

Keep an eye out in the autumn for the Civil Society Brexit Project, a collaboration between the Scottish Universities Legal Network on Europe (SULNE) and the Human Rights Consortium Scotland. This project will give information, insight and independent advice to make sure that organisations in Scotland are able to influence Brexit as much as possible.